Blog > 10 New Adult Graphic Novels We Just Got In 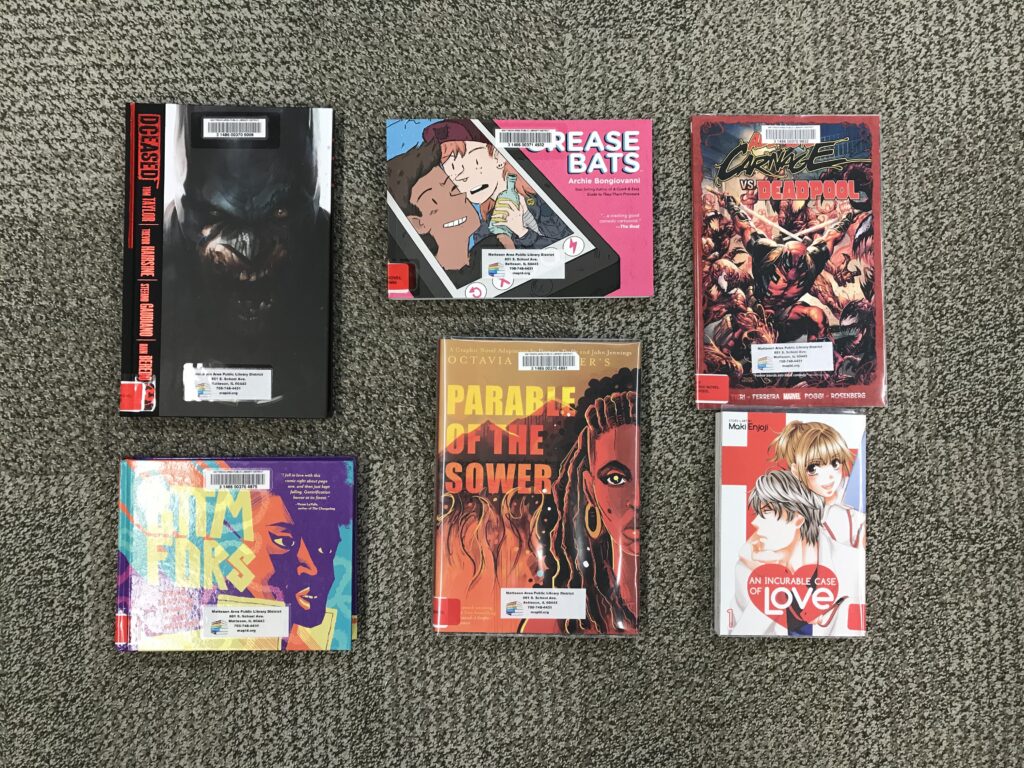 The MAPLD FanFest maybe over BUT, you can check out our list of new Adult Graphic novels that you can place holds on and check out now! There are also more graphic novels coming this month.

Read on to see the books in this selection!

Once a thriving working class neighborhood on Chicago’s south side, the “Bottomyards” is now the definition of urban blight. When an aspiring fashion designer named Darla and her image-obsessed friend, Cynthia, descend upon the neighborhood in search of cheap rent, they soon discover something far more seductive and sinister lurking behind the walls of their new home. Like a cross between Jordan Peele’s Get Out and John Carpenter’s The Thing, Daniels and Passmore’s BTTM FDRS (pronounced “bottomfeeders”) offers a vision of horror that is gross and gory in all the right ways. At turns funny, scary, and thought provoking, it unflinchingly confronts the monsters–both metaphoric and real–that are displacing cultures in urban neighborhoods today.

So, no one told you life was gonna be this gay! Grease Bats stars Andy, a trans genderqueer individual who is both tough and loving, and their BFF Scout, an all-feelings-all-the-time mistake-maker. Andy and Scout are best buds, roommates, and gay disasters. Along with their friends and plenty of beer, they’re just trying to make it through their 20s, survive late capitalism, and navigate the dating world.

An Incurable Case Of Love Vol. 1 by Maki Enjoji

After witnessing a handsome and charming young doctor save a strangers life five years ago, Nanase Sakura trained to become a nurse. But when she meets the doctor again and they start working together, she finds Kairi Tendo to be nothing like the man she imagined him to be!

What’s red and black with dead all over? Carnage takes on Deadpool once again in the mother of all sequels – and this time it’s absolute chaos! At long last, Wade Wilson is ready to get his head on straight, so the Merc with a Mouth checks himself into the prestigious Ravencroft Institute. Unfortunately, the facility has another new arrival: the symbiotic psychopath called Carnage! And he isn’t there for a group therapy session…! Madness and mayhem abound in the can’t-miss showdown of the year! Let’s get crazy! Plus: Chewie’s been Carnagized, and Carol ain’t happy about it! It’s Earth’s Mightiest Hero against a symbiotic space cat!

In this graphic novel adaptation of Octavia E. Butler’s Parable of the Sower, by Damian Duffy and John Jennings, the award-winning team behind the #1 bestseller Kindred: A Graphic Novel Adaptation, the author portrays a searing vision of America’s future. In the year 2024, the country is marred by unattended environmental and economic crises that lead to social chaos. Lauren Olamina, a preacher’s daughter living in Los Angeles, is protected from danger by the walls of her gated community. However, in a night of fire and death, what begins as a fight for survival soon leads to something much more: a startling vision of human destiny . . . and the birth of a new faith.

Eldo Yoshimizu’s Ryuko is a stunning manga which tells the action-packed story of a no-nonsense, tough, and resourceful woman of the Yakuza. Appearing in the English language for the first time, this dynamic story explores Ryuko’s life as she has to deal with the consequences of her past. After a fierce battle with the military, Ryuko’s search for the truth about her mother leads her into even more dangerous situations. As deadly enemies attack, Ryuko has to make some shocking decisions…

Straight from the mind of New York Times bestselling author Nathan W. Pyle, Strange Planet is an adorable and profound universe in pink, blue, green, and purple, based on the phenomenally popular Instagram of the same name. With dozens of never-before-seen illustrations in addition to old favorites, this book offers a sweet and hilarious look at a distant world not all that unlike our own

In Commute, we follow author and illustrator Erin Williams on her daily commute to and from work, punctuated by recollections of sexual encounters as well as memories of her battle with alcoholism, addiction, and recovery. As she moves through the world navigating banal, familiar, and sometimes uncomfortable interactions with the familiar-faced strangers she sees daily, Williams weaves together a riveting collection of flashbacks. Her recollections highlight the indefinable moments when lines are crossed and a woman must ask herself if the only way to avoid being objectified is to simply cease to draw any attention to her physical being. She delves into the gray space that lives between consent and assault and tenderly explores the complexity of the shame, guilt, vulnerability, and responsibility attached to both.

When a fight between Superman and Mongul crashes into a small northwestern town, Naomi begins a quest to uncover the last time a super-powered person visited her home–and how that might tie into her own origins and adoption. DC’s biggest, newest mystery starts here! Follow Naomi’s journey on a quest that will take her to the heart of the DC Universe and unfold a universe of ideas and stories that have never been seen before. Join writers Brian Michael Bendis, David Walker and breakout artist Jamal Campbell in Wonder Comics’ massively ambitious new series and star…Naomi!